First thing, there are a couple of important rules when using your Applesauce:

What floppy drives are compatible with Applesauce?

Applesauce has 3 separate ports for connecting up floppy drives in order to allow you to use the right tool for the job when it comes to working with floppy disks.

This was the original connector used for Apple II 5.25″ drives. The origin of these drives was the Disk II that used Shugart drive mechanisms that had a custom controller board on them (designed by Steve Wozniak). The custom controller board stripped away much of the drive logic and instead just routed most of the raw drive signals directly into the computer to be handled there. This is what allowed for the absolutely insane copy protection used on the Apple II, but it also works fantastically well for Applesauce as it gives us very fine grained control over the drive to achieve capabilities that other floppy drives cannot match (like stepping the head at 192tpi). One of the other things that was removed from the drives was an index sensor. An index sensor is used to trigger the start of a track, but wasn’t needed with how Woz stored data on the disk. With no index sensor and the drives being single-sided, this opened up the ability to flip a disk over to use both sides of it as if each was a different disk, which these days is referred to as a “flippy” disk. Flippy disks were also used by Commodore, Atari, TRS-80, and others. Applesauce supporting flippy drives directly means that there is no reason to have expensive modifications made to drives that aren’t even optimal for reading/writing these kinds of disks anyway.

The Apple Disk II drives are absolute tanks in terms of reliability. The capacitors all seem to be holding out well and they require little maintenance. The main drawback of them is that they are 35 track drives (can typically reach 36-37). So this makes them just fine for Apple II, C64, and early TRS-80, but Atari 8-bit uses 40 tracks. Luckily there were several 3rd party drives that support 40 tracks (reaching 41-42). The RanaSystem EliteOne is a great drive based on the Shugart mechanism that does 40 tracks. Another popular one is the µ-sci (Micro-Sci) A2, but they are a mix of 35 and 40 track without a good way to tell from the outside (probably 70% of these that I have run into are 40). And there are many more full height drives that are also compatible and readily available. There were also quite a number of compatible 3rd party half-height drives, of which many are 40 track. These work well, but there is no official sync sensor support for them, so flux imaging is disabled unless you come up with a sync sensor solution.

There are also a number of non-typical drives that were compatible with this 20-pin connector like the Amdek Amdisk I (3″ drive). Many of these also work just fine with Applesauce.

The most common drive for this port is the Apple 3.5 Drive (A9M0106). This drive is the Macintosh/Apple II CLV (constant linear velocity, 5 speed zones) drive that was used in the early days with the 400K and 800K disks. Many PC drives have issues reading these 400/800 disks, so Applesauce has native support for the original drives. An even better drive to get is the Apple 3.5 SuperDrive (G7287). These drives support the 400/800 disks as well as having an MFM mode that works like a regular PC 720K/1.44M drive. These drives are very highly sought after (by users as well as data recovery shops) as they are fantastically built drives that have a crazy ability to read disks that other drives cannot. Unfortunately, this also means that these drives can often cost $400 or more. But, there is another option to getting your hands on a SuperDrive. The Sony MP-F75W mechanism that is the heart of the SuperDrive was also used by every Mac from the Mac SE FDHD through the Mac LC. If you have an Apple 3.5 Drive, it is a very simple process (plug and play) to swap the mechanism with an MP-F75W. Old Macs are a great way to source these mechanisms. A SuperDrive is highly recommended for working with 3.5 disks as they will accurately read any disk you throw at them. The main downside of these Sony mechanisms is that the original eject motor gear is very likely to die, especially if you don’t clean up and re-grease them before use. Luckily replacement gears are easy to come by on eBay and such. Never connect a Mac 400K External Drive (M0130), Mac 800K External Drive (M0131), or Apple UniDisk 3.5 (A2M2053) to Applesauce or damage may occur!

There are also 5.25″ drives that connect to this port. The UniDisk 5.25 (A9M0104) and Apple 5.25 Drive (A9M0107) are both flippy drives that can typically reach 38 tracks. This makes them suitable for imaging Apple II, TRS-80, C64, and other similar disks (not Atari 8-bit that used 40 tracks). Although note that the A9M0107 doesn’t like the fast clocking of the first C64 speed zone, so don’t bother with trying to image those disks in one. There is also the Apple Disk //c (A2M4050) which is compatible with the Applesauce, but would need a custom sync sensor in order to support flux imaging. There were also quite a number of 3rd party half-height drives that are compatible with this port, of which many are also 40 track. These work well, but there is no official sync sensor support for them, so flux imaging is disabled unless you come up with a sync sensor solution.

The vast majority of 5.25″ and 3.5″ floppy drives are compatible as long as they used the standard 34-pin interface. All of the popular drives used for imaging should be good to go: TEAC FD-55B (5.25 360K), TEAD FD-55GFR (5.25 1.2M), Panasonic JU-475 (5.25 1.2M), Sony MPF920 (3.5 1.44M), etc. Applesauce will test the drive jumper settings when you set up a profile for your drive. You may want to have jumper shunt blocks of the appropriate size in case you need to change jumper settings. The most common change needed seems to be to enable Dual Speed mode on 5.25 drives so that Low Density disks spin at the correct 300rpm and High Density at 360rpm. Please note that drives modified to be flippy drives via the KryoFlux method (transistor on pin 33) are not compatible at all with Applesauce! If you need to work with flippy disks, use a real flippy drive like an Apple Disk II or one of the 3rd party drives that do 40 tracks. They do a far better job of reading and writing these disks anyway.

8″ drives should also work just fine for reading, but would very likely need separate power and and interface board to convert to 50-pin connector. Applesauce does not provide a TG34 signal for writing, so you would need to use an adapter board that can provide that signal if you want to write disks. Applesauce supports reading from hard sectored disks, but doesn’t currently perform writes based on the sector index signals. This can be added to the firmware if there is demand for this feature.

Other specialized drives (3″, etc) should also work, but have not been tested at all.

What is the function of all the lights, connectors, and switch?

The toggle switch controls Safe mode. Safe mode is a hardware override that will prevent accidental writing to disks. When Safe mode is turned off (switch is to the left and neighboring light is off) then the Applesauce is able to write to disks. When Safe mode is on (switch to the right and light is on), then the hardware is electrically prevented from writing to the disk. This is handled at the electrical level and overrides the microcontroller that powers Applesauce. Even if there is a catastrophic failure within the unit, it will be blocked from writing to a disk.

The four rightmost lights are indicators for Link, In Use, Read, and Write.

The Read light will be illuminated orange whenever the Applesauce is reading disk data from the floppy drive.

The Write light will be illuminated orange whenever the Applesauce is writing data to the disk in the floppy drive. 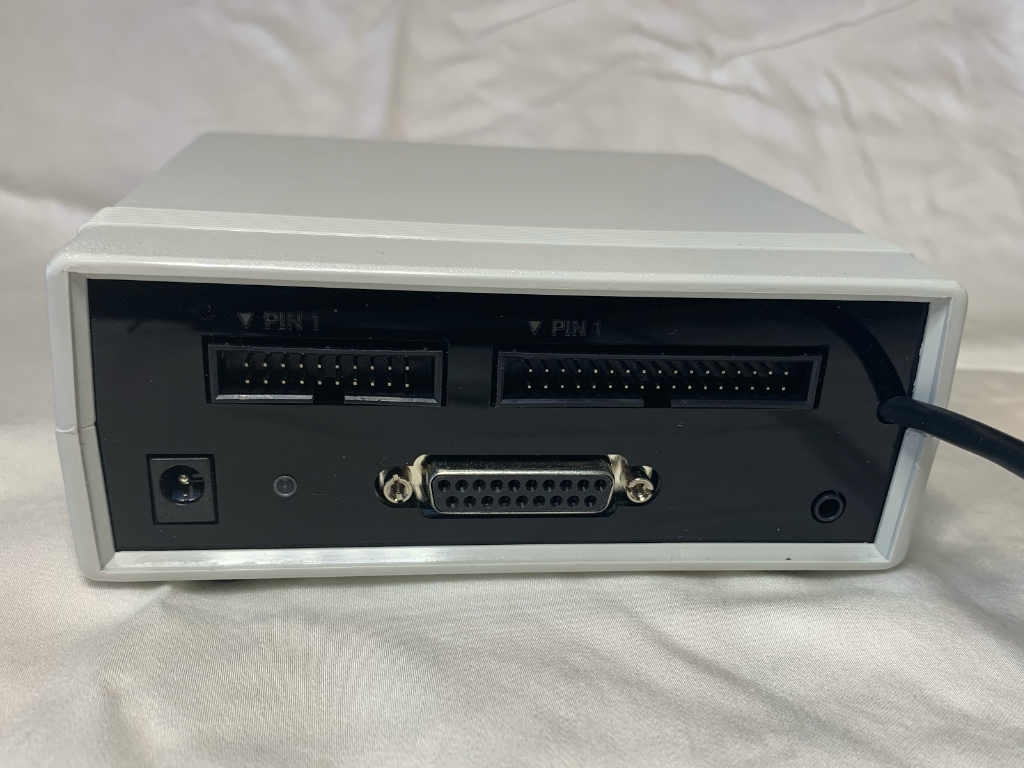 Immediately to the right of the power input jack is the power light. This will illuminate red whenever the connected floppy drive is being powered up.

The upper left 20-pin connector is for hooking up Apple Disk II compatible floppy drives and for providing power to other floppy drive that may need it. Note that pin 1 is on the left side, this should match up with red lines on the ribbon cable of drives that you connect to it.

The upper right 34-pin connector is for hooking up PC floppy drives. Note that pin 1 is on the left side, this should match up with the red line on the ribbon cable going to the floppy drive.

The cord coming out of the right side of the panel in a USB cable for connecting up to your computer.

The lower right jack is for sync sensors to be connected.

Never connect more than one drive at a time to your Applesauce!